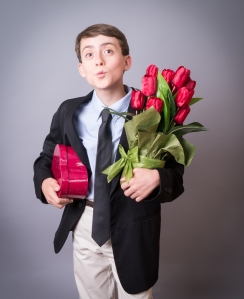 Valentine’s days in middle school were always fun and interesting.

Girls distributed candy and Valentine cards to everyone they knew. Boys gave their girlfriends chocolate covered hearts and teachers made pitiful attempts to teach a class full of distracted students.

This particular Valentine’s Day started off as nothing special. I received the usual Valentine’s gift from my Mom – a red Guess t-shirt, a Valentine’s day card, a teddy bear, Snickers, Skittles, and a heart shaped balloon. My hands were pretty full, but these were the typical presents I usually received from Mom on Valentine’s Day.

I arrived at school at my normal time, greeted my girl friends as usual, and exchanged presents with them. This was the normal routine for a Valentine’s Day in middle school. Nothing special.

In fact, nothing special occurred until lunchtime. In middle school, all things interesting occurred during lunch time.

I was sitting at my table with friends eating my lunch when a boy from another class approached me.

The boy and I were acquaintances. We spoke occasionally in the hallway and on the school bus. He was a nice guy; he knew how to make me laugh, and he was very sweet and generous to his friends. Most girls didn’t take him seriously though; he was teased for being the shortest boy in the eight grade. No middle school girl wanted to be seen with the shortest boy in eighth grade. He was a good friend to me, but I didn’t expect him to give me a Valentine’s Day gift. We weren’t that kind of friends.

“Thank you,” I responded.

He opened his mouth to say something, but his sentence was interrupted when his homeboy called him back to the table. “I’ll be right back,” he said, and hurried back to his seat.

“What was that?” My girl friend asked.

I shrugged my shoulders. I had no clue.

About 5 minutes later, the boy returned with a few small white flowers in his hand. “These are for you,” he said.

“I picked them from my mom’s garden. She was kinda mad at me for picking her good ones, but I thought you deserved them. Oh, wait a minute,” he said. He ran back to his table again.

Not knowing what to think, I sat at my lunch table holding his white flowers and wearing a big grin on my face. I wasn’t sure what was going on but I was enjoying his attention.

“This is for you too,” he said as he handed me a yellow weed.

“Awwww!” everyone in the lunchroom exclaimed in unison, “How sweet! Ask her out already!”

We were both blushing and luckily for both of us, the teacher dismissed his class from lunch.

All of my classmates were curious, “Was he going to ask you out?” they asked.

“I don’t know,” I responded, but I was hoping he wouldn’t. I didn’t want him to be my boyfriend. He was only my friend.

Seventh period, the last period of the day, rolled around. Math was my last class, but I had excused myself to get a notebook from my locker in the hallway. My locker happened to be in front of his classroom. While I was standing at my locker, he approached me again.

I could tell he was nervous, rubbing his hands together and stuttering.

His back was to his classroom but over his shoulder I could see his friends trying spy on us through a cracked door.

“Shut up,” he said and shut the door to his class.

“What I wanted to ask you is…”

“Did you ask her yet?” asked another boy who managed to crack the door open and poke his face out.

“Shut up man!” he said and shut the door.

“Yaa Yaa, will you be my girlfriend?”

I started blushing. I was flattered. I wasn’t feeling him like that, so I wanted to say “no” but I didn’t want to hurt his feelings.  After all, it was Valentine’s Day.

By the way this situation was unfolding, one would think it was planned. As soon as he finished asking me out and I was contemplating my response, a girl from his class summoned me to the classroom. “I need to talk to her alone,” she said, “You stay out there,” she said to the boy.

Confused, I walked into the classroom and one by one, his classmates pleaded with me to give him chance. They said:

“No, seriously you should really go out with him.”

“All he talks about is you, Yaa Yaa.”

Mind you, in middle school, I was not the social butterfly, gregarious socialite that I am now. I was painfully shy and very easily embarrassed. I’m a Black girl, but I’m pretty sure at this point, my face was red. All this attention was a bit overwhelming.

He was standing outside the classroom waiting for my response. I thought about what my classmates said and figured I’d give him chance. What the hey, it is Valentine’s Day!!

“Yeah, I’ll go out with you. But where are we going because my mom won’t let me go out with boys.” I said sincerely.

By this time, I had been out of class for over 5 minutes and my teacher came out looking for me. Plus, the commotion of students cheering was a bit loud and he was concerned that we were becoming unruly.

“I need you all to get back to class,” my teacher said.

My new boyfriend and I gave each other a quick hug.

“OK” I said to my new boyfriend.

With that, he danced, skipped, and high-fived his friends in his classroom. “She said YES!!” I heard him say through the closed door.

We dated, like other middle school students, for one week. I broke up with him in a letter to him that started, “It’s not you it’s me…”

3 thoughts on “A Love Story for Valentine’s Day”