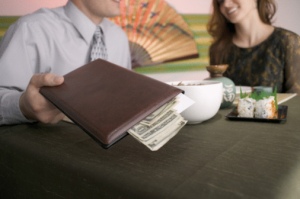 VIP admission at the premier dance club in Abuja, Nigeria, mixing and mingling with Naija (Nigerian) celebrities, and posh 5-star hotels: I was living the good life.

The guy and I met through a mutual friend during my stay in Abuja. A socialite, he was pretty popular around town; held prestigious job title at a well-known company, and had that “it” factor that would attract any woman.

Time spent with him was always something to look forward to. He had a good sense of humor and a charming personality. I had only been in Abuja for 4 weeks but he was becoming a good friend.

Besides his personality, I enjoyed the fact that when we were together, I always had a good time.  He granted me VIP admission in Abuja’s nightclubs, introduced me to local celebrities, and treated me to meals at the nicest restaurants in town.

One Sunday afternoon after lounging around the pool at my hotel, we decided to grab something to eat. I pulled on summer dress and pulled my braids back in a ponytail and we drove around town for about 40 minutes until finally, he parallel parked his car in front of an upscale restaurant on the posh aide of town. Now, I was starving. Normally, dining at a 5-star restaurant is not an option I would refuse, but given my growling stomach and the fact that I hadn’t eaten in the past 16 hours, all I wanted was something quick from Nigeria’s equivalent to a Picadilly’s, called Mama Cass. I offered my suggestion, but he refused, “Your time in Abuja is coming to an end. I’d like to take you somewhere new.” I reluctantly agreed.

When we walked into the luxurious restaurant, the owner enthusiastically greeted my date by name. The two chatted like old pals who hadn’t seen each other in years. The server sat us near a window facing the mountains and greenery outdoors. I was impressed. The restaurant owner knew my date and even knew his favorite place to sit at the restaurant. I knew I was in for a treat.

My date and the server discussed the menu options in Nigerian Pidgin English, which was only slightly familiar to my American English ears. I could only interpret a couple phrases and words, which was not enough to capture the essence of the conversation. My date translated their discussion for me, but he still took the initiative to order for me. I’m not a picky eater, so I agreed to everything he suggested.

While he was ordering, my initial thought was that he was ordering too much food for two people. Although my date had a large appetite, I did not. I tend to eat smaller meals than the average person. I started to ask him why he was ordering so much food, but I caught myself. My date was the type of person who would drop $300 on drinks at a club easily. He often brags about the fact that he bought a flight ticket to the U.S. a week before his scheduled flight to attend a party. He was the type of guy who splurged as if money grew on the trees in his backyard. The last thing I was going to do was interrogate him about spending habits. Plus, given the executive position he held, I was certain he could afford it. But, I was fooled.

Once our order had been placed, he gave me a tour of the 5-star restaurant, making sure he mentioned several times that this was most expensive restaurant in the city. “I’m sure no one brought you to this restaurant, right? Yeah, not many people could afford it.” We took a few pictures; enjoyed the breath-taking view of nature posing outside our window.

Our appetizers arrived a few moments later, followed by our entrée and dessert. The food was delicious. My date and I were engrossed in an interesting conversation about Nigeria’s political climate, when the server placed the check on the table and thanked us for dining at therestaurant.

My date picked it up. He perused the check. Then, called the server over to our table. They had a few words to exchange in Nigerian Pidgin English. I could not understand much, but from what I observed, it seemed like my date was asking questions about the check and our server was justifying the price.

“What’s going on?” I asked him. “Nothing,” he said nonchalantly, “I guess it’s been awhile since I last ate here.” He continued to pull out wads of cash from his pockets. Every time I thought he was finished taking out his money, he pulled out some more money. He’d count and re-count. Then, count his money again. I watched him for a few moments, then figured I’d find something to take my mind off my date’s strange behavior. I took out my cell phone to check my missed calls and text messages. I was engaged in sending my homegirl a text, when he looked up at me, and asked, “How much money do you have?”

“What?” I said, making sure I understood his words correctly. Clearly, my date was not asking me to pay for our meal after ordering too much food. I could tell by the look on his face that he did not want to answer any questions. I looked up at him, giving him a perplexed look, when he asked me again – but this time it was a statement –how much money do you have.

I grabbed my purse and counted my first wad of cash. Nigerian currency is different from American currency. Since $1 = 149 Naira (NGN), carrying Naira meant one was carrying wads of cash, making it appear that she has more money than she actually does. In order to keep my money straight, I typically carried it in bundles of 1,000 NGN (or $6.71).

The first bundle I gave him. He counted it. How much more do you have? He asked again. By this time, I understood what was going on. My date did not have enough money for the bill. I took out two more bundles. He counted my money and his money together. It still wasn’t enough.

I slid him two more bundles. He counted the money again and called his server over. He gave the server our money. The server left the table and came back to return 200 NGN ($1.34), which my date slid over to me.

“Oh you don’t need this?” I said sarcastically and slid the money back in my purse.

Once we returned to my date’s car, he seemed to have forgotten that I contributed 5,000 NGN ($33.56) to the meal that he treated me to, for he did not mention a word about it. To spare his ego, I never mentioned it either.

I recalled this story to a friend one day. He chuckled and said, I guess you learned always have your vex money at hand, when a man takes you on a date. You never know when he may leave you with the check!

3 thoughts on “Vex Money: When My Date Left Me with the Check”

The Pages of Paige