It’s not every day that I talk about my sex life. I’m a pretty private person. In spite of that, there is one thing that makes me more uncomfortable than sharing what I do in the bedroom.

What’s that thing, you ask?

When my friends were kissing and telling, I’d stay quiet. I love watching shows like Girls and Insecure that depict carefree relationships among friends who share everything, including the intimate details of their relationships. But for me, questions like, “How was your first sex?” feel invasive.

If you put a gun to my head and tell me that I have the choice to discuss my income or my sex life, I’d start talking about my sex life. I’ll provide you all the gory details — more than you ever wanted to know — before I’d tell you how much money I bring home.

I landed my first real job 8 years ago. I was fresh out of graduate school, armed with a shiny new master’s degree and a chip on my shoulder. I found a job through my excellent networking skills and kick-ass resume. I didn’t accept the salary that was offered to me. I followed my big cousin’s advice and asked for $5k more. The hiring manager chuckled and said, “I like you.” And she granted my desires right on the spot.

I had the job of my dreams. I was getting paid 15% higher than the nation’s average income and was proud of myself and I wanted the world to know. 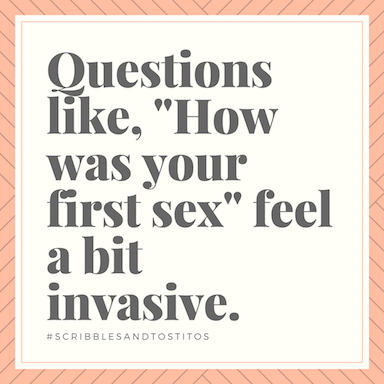 I told my parents, my siblings, my cousins, my friends. I think I even told my grandmother. My earnings might as well have been tattooed on my face because I’m pretty sure that if you said, “Hello,” I’d tell you about my big girl job and my big girl salary.

It wasn’t long before I started to regret my decision. Nowadays, I have a strict policy. I don’t share my salary with anyone but my husband and career advisor. It’s better for everyone else to be in the dark regarding such matters. Here are three reasons why.

Others feel entitled to your ends.

When you go to a restaurant with relatives to eat, they insist you pick up the tab. After all, “you’re making money now.” Nevermind that you just paid rent, utilities, and put some money away for a rainy day. They don’t care about what else your money is dedicated to, they want you to spend your money their way.

Others ask you for money and if you don’t give them the amount they want, they label you as stingy. Or even worse, they badmouth you behind your back.

Your frugal habits are criticized. “Why are you doing that? You can afford to buy cable or park in the premier parking spot in front of your building,” they’ll say.

They judge your spending habits.

People spend their money on based on their priorities. Yet, people judge others by what you have, regardless of your circumstance.

For instance, if someone owns a nice car, people assume they are making a lot of money. I knew a lady who earned $25,000 per year at a contract job. As soon as the job became permanent, she purchased a brand new Mercedes Benz.

Our common friends were in awe. “Wow,” they thought, “She makes good money.”

Meanwhile, I’ve heard of millionaires who drive a hooptie. Society is so shallow that they’d praise the woman earning $25,000 and driving a Mercedes Benz and look down on the millionaire driving an old car.

A few years ago, I was unemployed. I was collecting monthly employment checks and living with my parents. My cousin, on the other hand, was making a pretty hefty salary in her executive role but wasn’t satisfied. She felt she should have been making more.

I let her vent for a little while then told her I had to get off the phone. I was annoyed. She was complaining to an unemployed person about her salary. I’d be lying if I said I didn’t feel a tiny bit of resentment.

There are so many things that people use to justify their mistreatment towards you. Sharing my salary just gives them more ammunition. It’s unnecessary.

I’ve been anti-income sharing for the majority of my career. Recently, I had a conversation about the topic with Krystal of Let’s Build Futures. She says that there is no way that we can beat the income inequality gap unless we share our incomes. She had an excellent point, but I’m torn. Sharing my income makes me vulnerable. I would become aware of income discrepancies in the workplace and among friends. Such information would make me a better negotiator, but it might cause a strain on my relationships with others. It would leave me vulnerable to criticism and manipulation. Ignorance is bliss, isn’t it?

Let’s chat in the comments section below!

36 thoughts on “I’d Rather Talk About My Sex Life”

Leave a Reply to Scribbles and Tostitos Cancel reply